We have received the following employment opportunities for current pupils at Borden Grammar School from a local Insurance Broker, based in Oad Street, Borden.

The Insurance Broker contacted us back in 2013 and 2015 with similar opportunities.  Neil Barlow, director of the company, now has a further opportunity for two apprentices to start in the summer.  Neil is also offering work experience opportunities for 1 or 2 weeks. Neil has written to the School and the Association with the following offer:

The 2017 Dinner saw 59 of us enjoy a convivial evening and excellent meal at the UK Paper Clubhouse, Sittingbourne. The guest speaker was Phil Bromwich, a regular at the Dinner and a school governor for 25 years during five of which he was the chairman.

Old Bordenian Norman Wigg (BGS 1943 - 1948) has sent me a number of articles recalling stages of his life, including his experiences of the Battle of Britain whilst living in Teynham and his days at Borden Grammar School.  I will add these over the coming weeks, but will start with his recollections of the Battle of Britain.  Whilst Norman was too young to be at BGS at the time, I think this will be of interest to many visitors to this site. 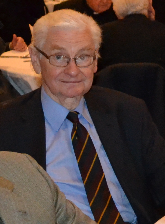 This is a reminder for all those Old Bordenians intending to attend this year's Annual Reunion Dinner on 25 March at the UK Paper Leisure Club, Sittingbourne.  There are only a few days left to book your place at this event.  Full details and how to book are included in the article below (follow this link: Annual Reunion Dinner - full details). There are a couple of groups celebrating major milestones at this year's dinner.  They are the class of 1967 starters, who are celebrating 50th anniversary of starting at the school and the class of 1987-1992, who are celebrating their 25th anniversary of leaving the school.

I have been given copies of the OBA annual yearbook, The Maroon, from 1951 to 2009 (the last publication) with just four years missing.

We have produced an easily accessible and printable copy of all the articles posted on the website over the past year, similar to the Maroon publication, which was discontinued in 2009.  It includes all material suitable for printed format during 2016, with a couple of articles published early this year.  To access the digest, click this link:  Website Digest 2016