The minutes of a committee meeting held at the School on Friday 3 October, 2014

Minutes and matters arising: The minutes of the meeting held on Friday 13 June, 2014, were agreed and signed as a correct record. There were no matters arising.

Treasurer’s report: As per the AGM report.

Dinner Secretary’s report: The 2015 annual reunion dinner will take place at UK Paper on Saturday 7 March and the guest speaker will be old boy Dennis Fowle who will speak on the subject of “So I started a newspaper and George Hardy is to blame”.

Membership report: As per the AGM report

Football report: The 2014/2015 indoor 5 a side season is only one evening (2 games) old and so there is little to report from the new season. Had we not finished second in both of those games I may have tried a little harder.

Instead I shall submit the report issued for the last committee meeting on 13th June 2014 which summarized the 2013/2014 season although I am able to offer the occasional update in italics.

It is tempting to file exactly the same end of season report as last year’s having experienced two remarkably similar back to back seasons in the Sittingbourne 5-a- side League.
Last season we had a very slow start but then enjoyed a purple patch towards the end and eventually finished 4th in the league narrowly missing out on the runners-up spot. This year we had a slow start and a storming finish and finished 4th again, although we were not as close to 2nd spot.

We won through to two cup finals last year and we did the same this year. Last season we lost one of the finals 1-3 and did the same this year and by the same score. We went on to win the Knockout Cup 2-1 last year, our first winner’s trophy for many years and, guess what, WE WON IT AGAIN THIS YEAR but this time by a stonking 3 goals to a rather inadequate 1. No doubt about it, a slight improvement.

We had a good incentive to win it AGAIN because we have mislaid the actual trophy so it gives us another year to find it. If that fails then we will have to go for the hat trick of wins in the hope that, just as Brazil did in 1970 (stay with me on this one) we get to keep the trophy for good. Call off the dogs, the trophy has been recovered.  It was found at the house of Peter “I haven’t seen it. Cliff or Aida had it” Thompson, thus easing the pressure on us to win it for a third time.

There, alas, any similarity between Brazil and the Old Bordenians ends although it could be argued that some of us playing competitive 5 a side into our 50s and 60s does make us nuts. Should anyone still harbour thoughts of any similarity then we can scotch that by pointing out that we, unlike Brazil, did not lose 7-1 to anyone last season.

Our squad is again largely unchanged from last year but avid readers will have remembered that, at the end of last season there was a tantalizing chance that the squad could be bolstered by even more younger legs. Well, you can stop fretting because it did happen and we now have 4 players in the squad still in their 30s!

And the good news doesn’t stop there because they will still be in their 30s next season so with a better start to the 2014/2015 season* we are hoping to add to our haul (let’s be honest, it is now a haul) of silver (tin) ware. *Whoops.

‘Old Bordenians, still the Knockout Cup holders’ the stadium announcer could have screamed but just as last year there is still no announcer and still no stadium.

Website report: The website continues to be stable.  Eight new articles or comments on articles have been added since the last report. 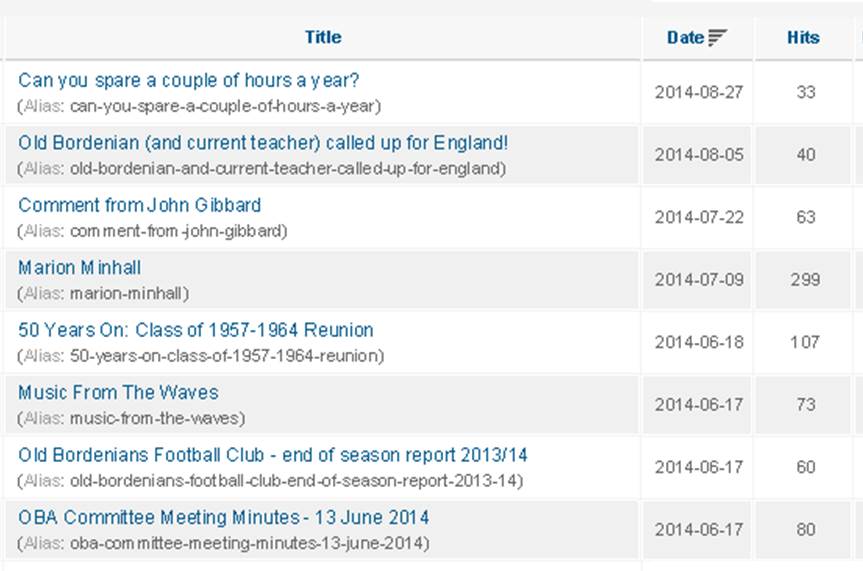 The table above shows these recent additions to the website, together with their date of posting and number of hits to 14th September 2014.

As always, it would be helpful if committee members would consider producing something of interest to post on the website.

Once again, I feel I should point out the small cost to the Association of maintaining the website, which is less than £20. This covers the cost of the .co.uk and .com website addresses.

The Website Committee will be investigating the possibility of raising funds by incorporating suitable advertising on the website in the future, but this will have to be in conjunction with the school who host the website.

Remembrance report: This year’s annual service of remembrance is planned for Saturday 8 November, 11.00 at BGS.

Any other business: K. Shea suggested using Facebook as a means to reach potential members of the Association.

There was a lengthy debate about the future of the Association, its funding and its declining membership.

There being no further business the meeting closed at 8.16 p.m.