The minutes of a committee meeting held at the School on Friday 13 June, 2014

Minutes and matters arising: The minutes of the meeting held on Friday 31 January, 2014, were agreed and signed as a correct record. There were no matters arising.

Correspondence: A letter been received from old boy George Beynon thanking Dave Palmer for the website digest and reflecting on the annual remembrance service.

The president had written requesting some financial support for a laser cutter to be used in the school technology department. It was agreed that a donation of £2,500 would be made immediately, with up to £2,000 to follow towards the end of the association’s financial year. This would provide the cash flow to cover the outlay for the annual dinner in March.

Treasurer’s report: Association funds stood at £4,958.86 with virtually all subs received and the head had been advised that funds were available if he had a project in mind. There had been no call on our funds this year to assist any boys who would otherwise not be able to afford to go on the Y9 trip to Ypres (we granted £1,000 last October towards travel expenses for the needy). We paid Les Olive £100 for his expenses and we have paid £130 as a deposit for next year’s dinner. Postage paid to BGS re dinner notice was £280, so we should save on this next year with an email only pre-dinner campaign.

Dinner Secretary’s report: More than 60 Old Bordenians met on 22 March at UK Paper clubhouse in Sittingbourne for the 2014 annual reunion dinner of the Association.

Guest speaker was Leslie Olive, music master at Borden Grammar School in the 1970s, who went on to combine a career in education in Surrey and Suffolk with his talent for forming and running choirs and latterly his own full, and professional, symphony orchestra.

Les spoke passionately about the importance of education and the difference between education and business as he toured the room with microphone in hand to elicit the views of some of his former pupils. Both Ken Coker and Greg Barry spoke movingly about their time at school and what music and inspirational staff members had meant to them.

The new president of the Association, and head teacher at Borden, Jonathan Hopkins, responded to the toast to the School and Association with a comprehensive account of his teaching career and his family life. He thanked the old boys for their donation to school funds enabling the recent purchase of a new minibus and he recounted his first year at the School and the challenging conditions he had encountered including an Ofsted inspection within his first few weeks. He said he had been pleasantly surprised by the strength of support from the PTFA and the old boys and by the underlying spirit of Borden which, he had been advised by another staff member, gets under the skin.

The 2015 annual reunion dinner will take place at UK Paper on Saturday 7 March and the guest speaker will be old boy Dennis Fowle who will speak on the subject of “So I started a newspaper and George Hardy is to blame”.

Membership report: Nothing to report at this time of year.

Football report: Keith Shea provided a full end of season report for the committee.  This will be added to the Website as a separate article.

Website report: 1. The website has been stable since the last report.  Eleven new articles or comments on articles have been added since that report. Seven people have now registered to be informed of any new articles posted onto the website.

2. The picture below shows the most recent additions to the website, together with their date of posting. As always, it would be helpful if committee members would consider producing something of interest to post on the website. 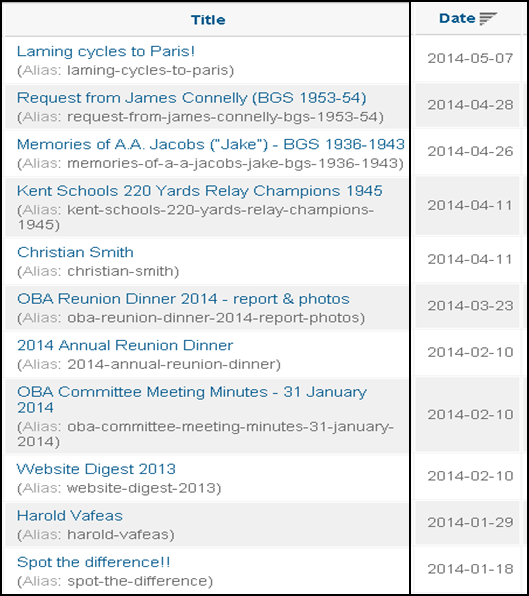 3. We’d like to reiterate the small cost to the Association of the website. This is less than £20 a year, which covers the cost of the .co.uk and .com website addresses.

4. The Website Committee will be investigating the possibility of raising funds by incorporating suitable advertising on the website in the future.

Remembrance report: Minutes of a meeting held on Sunday 11 May, 2014, at 5 Roonagh Court, Sittingbourne.

1 Date of remembrance service 2014: It was agreed that this year’s service would be held on Saturday 8 November.

2 CL would write to Bryan Short asking whether he would be prepared to lead the religious service this year. Stanley Evans would also be invited – CL to send note.

3 The school would be asked to reserve the Old Hall for the ceremony.

4 Nothing had been heard from M. Stewart. CL would send him another email to see whether he would be prepared to give another talk as in previous years.

5 CL would write to the head teacher asking for school involvement – senior students and staff and inquiring whether a tour of the school might be possible (Tim Hewitt).

6 CL would make contact with David Jarrett to check which veterans Denis would normally invite. Try to ensure continuity of invitations to regular attendees. Ditto the invitations normally issued by M. Stewart.

8 Graham Barnes to be asked to MC the event.

Any other business: A proposal by Dave Palmer to limit the OBA committee meetings to one per annum (immediately following the AGM in October) was accepted. Ad hoc meetings would be called at other times in the year only if required.

Mike Pack volunteered to take over from Neil Hancock as Hon. Treasurer when Neil steps down in October.

Mike Pack reported on the memorial service held in Sittingbourne for Harold Vafeas. The secretary was asked to let the head know that the OBA would be willing to contribute to any school memorial to Harold.

There being no further business the meeting closed at 8.30 p.m.

AGM and next committee meeting takes place on