The minutes of a committee meeting held at the School on Friday 31 January, 2014

The committee was informed of the death of the former president and head teacher Harold Vafeas and the committee stood for a minute’s silence. Funeral arrangements were noted and details of a planned memorial service would be notified in due course. Committee members signed a card which would be sent to the family. A collection was also held and

Minutes and matters arising: The minutes of the meeting held on Friday 4 October, 2013, were agreed and signed as a correct record.

A. Snelling queried whether a decision taken at the previous meeting to cease paying for ad hoc donations from Association funds had been recorded and was reassured that it had under “Treasurer’s report”.

Correspondence: The secretary had received a kind letter from Jonathan Hopkins thanking the Association for its donations totalling £6,000 agreed at the previous meeting.

Mr Tim Topham had written to the school inquiring about his grandfather Edward Snee, who taught at the school in 1904 and had served as a second lieutenant in the Borden Cadet Corps. A background discussion involving G. Barnes, M. Stewart and Bryan Short had failed to uncover any further information but did highlight the fact that we have no idea what happened to staff members during the First World War – a gap in our now comprehensive knowledge of school war casualties.

The secretary had written to Mrs M. Vafeas extending the Association’s deepest sympathy in her family’s bereavement.

The Rev. Stanley Evans had written in response to a note of thanks following the Remembrance service saying how much he had enjoyed the service and that he hoped to attend the annual dinner.

Treasurer’s report: Association funds stood at £1,290 following the £6,000 donation to school causes agreed at the last meeting. We can expect the amount to increase by approximately £4,000 once the annual subs arrive in June. The accounts examiner, P. Taylor, had two queries on the accounts. He noticed that there had been a reference to two cash donations in the minutes of earlier meetings but had not been able to trace them as having been paid. He was informed by C. Laming that one had been paid in with the last annual dinner receipts. K. Shea said that he was in possession of the other donation. There was an on-going query over the costs of running the website involving the treasurer and D. Palmer.

Dinner Secretary’s report: Arrangements are in hand for the 2014 annual dinner which will take place on Saturday 22 March at UK Paper Clubhouse. The ticket price is £22.50.

Leslie Olive, a former music teacher at BGS, had agreed to propose the main toast. The new president was invited to attend the dinner and respond.

The committee agreed to extend an annual invitation to the school caretaker, Tim Hewitt, to attend as its guest.

Membership report: Keith Shea reported: At the last meeting I provided a bit of a rushed report due to work commitments. Since then I’ve had a little more time to review matters and can offer updates on the figures that I reported last time.

Closer examination of the bank statements throws up a greater number of members who no longer pay by standing order than I had thought.  48 members have stopped paying by standing order and a further 41 who would normally pay by cheque or cash have not paid their subscriptions either. These numbers exclude those notified to the OBA as having passed away. The loss of subscriptions through standing orders is a real concern as these are stopped by a positive action rather than the inaction of a forgotten cheque or cash payment.

I will issue reminders with the mailing going out tonight/next week but I do not expect to recover many of the members who had previously paid by standing order.

In addition to the above we have continued to receive subscriptions for four members who recently passed away and we should write to the families of David Nicholls, Les Holmes, John Ford and Chris Willson to let them know.

We have enticed eight new members in the last 12 months namely:

Since that last committee meeting we have been told sadly that Dr Brian Cory (at the School ‘39 – ‘46) has passed away and of course we are all aware that Harold Vafeas, head teacher of the school for the last nine years, passed away on 25 January.

Hockey report: Neil Hancock gave a brief update on the activities of OBHC. Much of the focus is on the men’s Ist XI gaining promotion which they’d narrowly failed to do last season but all of the teams continue to perform as well as ever. The club had lost revenue due to the inclement weather and perimeter fences had been damaged in the recent storms. The club is looking to revamp its financial structure. The all weather pitch is almost 10 years old and will need replacing at a cost of £150k in the next three to five years. A commercial loan may be required.

Football report: Keith Shea’s report: In my last football report (4 Oct 2013) we had won our first game of the season after five straight defeats and, no doubt giddy with excitement,  I foolishly predicted that we’d overturn the head start that we had given the rest of the league and storm up the table.

I was partially correct but it’s been more of a damp, grey, overcast and slightly chilly improvement rather than the hoped for storm. Still we are now fourth (out of six) in the league and I think we have a strong chance of a podium finish.

In truth the league has been a bit of a distraction from the cup competitions where we have played our best football. As holders of the Knockout Cup, I’ll just pause there for effect... we have made it through to the final yet again! Ho hum. And we are well placed to reach the final of one of the other competitions.

During the season we have at one time or another beaten all the other five teams so if we can just find a bit of consistency we are confident that we will come away with some silverware or, more likely, plasticware.

During the Christmas break we held a very successful Cocktails Evening. We relaxed our nutritionist’s stringent dietary regulations to allow the players to gorge themselves on Nobby’s Nuts and London Pride, although other snacks and drinks were available. All profits from the evening will go towards a worthy cause, most likely the end of season Cocktails Evening which will have a similar format but hopefully at an establishment serving Bullock’s Olde Scrumptious.

For the record, the squad this season is:

Footnote: Quite literally. Julian suffered a broken big toe competing for a drop ball and we wish him a speedy recovery.

Website report: David Palmer reported: The website has been reasonably stable since the last report in September 2013.  Ten new articles or comments on articles have been added since that report including, as promised in the last update, an offer to all site visitors to register with us to be kept informed of additions to the website or any future lengthy system downtime.  Only one person has registered for the service outside the Website Committee! 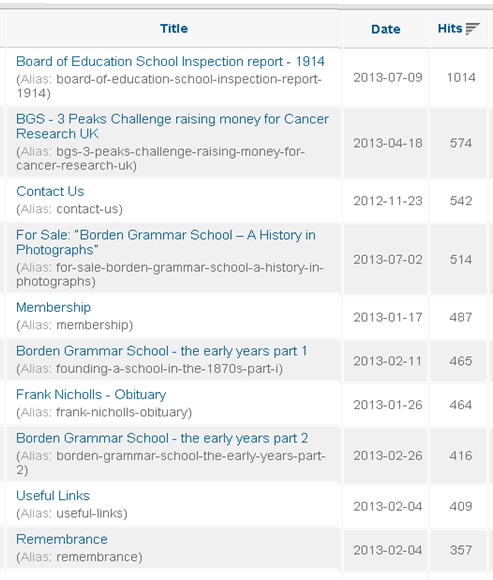 The picture on the right shows the most popular pages since the new site was launched, together with their respective hits.  The one hundred year old Board of Education school inspection report has now been accessed over a thousand times!!I’d like to reiterate the considerable financial benefits of the move to the school site, with the total cost of the website to the Association reduced to less than £20 a year, which covers the cost of the .co.uk and .com website addresses.

The annual Website Digest has been produced to be sent to those members that requested it when the Maroon ceased publication.  There are currently 18 members requiring this service, although I will be checking with Keith that these 18 are still members!  The Digest will also be posted on the website for all members to download and read at their leisure.

As always, it would be helpful if committee members would consider producing something of interest to post on the website.  In my last report, I appealed especially for a piece on the benefits of the Association and what we have achieved in the last few years to try to attract new members.  Graham Barnes produced an excellent article in response.

Remembrance report: A report was circulated about the annual service of remembrance that had taken place at the school on 9 November 2013. It had been very well supported and was deemed a great success by those present.  C. Laming said a meeting of remembrance committee would be arranged for the early summer to discuss this year’s arrangements.

Any other business: N. Hancock gave notice that he would be tendering his resignation as treasurer at the AGM in October having served 13 years in the role. He was warmly thanked for his contribution. A volunteer is therefore sought.

There being no further business the meeting closed at 8.26 p.m.

Date of the next committee meeting: Friday 13 June.