The minutes of a committee meeting held at the School on Friday 4 October, 2013

Minutes and matters arising: The minutes of the meeting held on Friday 14 June, 2013, were agreed and signed as a correct record.

There were no matters arising.

Treasurer’s report: As per the AGM report as follows: The Association made a surplus of £2,071.23 compared with a loss of £582 the previous year. Subscriptions at £3,582.50 were £150 down on 2012 which the treasurer described as a worrying trend. The committee agreed to rein in any ad hoc donations due to pressure on finances. However, the dinner had made a small profit and this, along with the sale of ties and a small donation, led to a total income of £3,688.80 for the year ended 31 July, 2013 and a gave balance sheet total of £7,808.02.

B. Gilbert proposed the adoption of the accounts and S. Caveney seconded. The committee thanked N. Hancock for his continued contribution as Hon. Treasurer and also P. Taylor who would examine the accounts.

After a discussion with the new president, the committee voted in favour of providing a £5,000 donation to the school minibus fund and a further £1,000 for use by the head teacher to assist pupils in need of financial support for school trips etc.

It was further agreed that the Association would provide a school prize, proposed by N. Hancock and seconded by A. Snelling. The prize would reflect achievement in the field of I.T. studies.

Dinner Secretary’s report: Arrangements are in hand for the 2014 annual dinner which would take place on Saturday 22 March at UK Paper Clubhouse. The ticket price would probably be increased from £20 to £22. The committee was in general agreement that the OBA would save money by not mailing out a dinner invitation this year but would instead contact past dinner attendees via email. Alan Snelling volunteered to head a small sub group comprising P. Lusted, K. Shea and D. Palmer to coordinate an electronic mailing list.

Leslie Olive, a former music teacher at BGS, had agreed to propose the main toast. The new president was invited to attend the dinner and respond.

The Sheppey Dinner would take place on Saturday 16 November, 2013.

Membership report: Keith Shea’s report was read to the meeting: I have been working away for the last 6 months and so have had little time for OBA membership duties however I can offer a brief synopsis.

This means that around 410 members have continued to pay their standing orders this year out of an expected 424. 67 members pay by cheque or cash and so far I have received just one £10 note from one member who lives in Dublin. He did the same last year too.

As previously discussed it is worth sending out 66 reminders as 2nd class postage would be around £33, or cheaper if franked, with a maximum return possible of £660.00 although realistically it will probably realise say half of that.

I haven’t had a chance to write to the 2013 school leavers to let them know about their free 4 year membership but I hope to have more time soon when my stint working away finishes in about 4 weeks time. I will then arrange to meet with Alan Snelling, who has kindly agreed to assist with aspects of the membership secretary duties, and update the data base with e-mail addresses, subscriptions, new leavers, reminders to 2009 leavers etc in an attempt to reduce the postage bill when we send out the dinner invitations.

The secretary was asked to contact the head of sixth form and ask him to circulate to leavers a website article by Graham Barnes setting out the reasons for joining the OBA.

Hockey report: Neil Hancock gave a brief update on the activities of OBHC. The Ladies’ 1st XI had secured a three year sponsorship deal and the club was going from strength to strength. The men’s 1st XI had its best results for 25 years, losing narrowly to Sevenoaks in the Kent Cup final. Their low point came in the play off of the Kent/Sussex Division 1 league when they had played poorly and therefore stayed in the same league for this season. The club has a new website and recently spent £16,500 plus VAT on replacing the sand on the all weather surface, thus extending its life by three to five years. A new carpet will cost £150,000. A plaque recording the names of those who had helped finance the synthetic pitch is now on display in the pavilion. The ladies had started their new season ahead of the men and had won two of their first three games.

Football report: Keith Shea’s report was read to the meeting:  The Sittingbourne 5 a side league season is now 3 weeks old and as ever it’s a bit of a slow start for the Old Bordenians team with 5 defeats and 1 win. However, the win was achieved in the second game last night and was a stonking 6-0 one. That will no doubt set our season going and we’ll move forward from here and overturn the head start that we have given to the rest of the league.

Cliff Cork is running the team this year and there is a move to lower the average age of the team by around 30 years by simply introducing his two sons and semi retiring Peter Thomson and me.

For those that do not know we ended last season strongly and narrowly missed out on the runners up spot in the League before going all the way and winning (no misprint) the main cup completion. Here’s to a repeat this season.

Website report: The website has had a number of problems over the summer holiday period.  The effect was that the oldbordenians.co.uk address didn’t direct site visitors to the website, although the oldbordenians.com address was OK.  Any emails sent to the webmaster or admin email addresses were also not received.  At the start of the new school term in early September, I met Steven Dale (the school’s ICT technician) to address the problems, but because of his workload in maintaining the school’s IT and Communications systems, the issues have only just been resolved.  We have to accept that his first priority must be to maintain the school’s systems and our issues have to wait for any spare time.  It should be noted that the actual site itself has always been available and I had been able to access it, but it did need a little perseverance and knowledge of the 2 site addresses. In my opinion, as soon as the changes that have been made to the school’s network have bedded down, there should be no reason why the issues that we have encountered should recur. I will work with Steven to ensure that we are alerted to any potential impact on the site due to essential maintenance of the school’s system to ensure the availability of the website is kept to a reasonable level.  The Website Committee will look to collect email addresses of regular site visitors to inform them of any future lengthy system downtime.

Despite the problems above, we have continued to post articles at regular intervals.  Bryan Short had provided two more instalments of his ‘Early Years of the School’ research, which Graham Barnes had typed up and sent to me.  For those that have read the last instalment, this was not an inconsiderable task!

The picture below shows the most popular pages since the new site was launched, together with their respective hits: 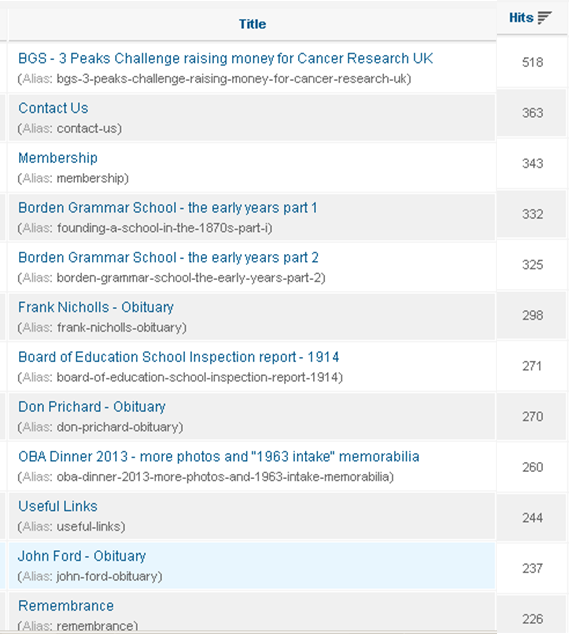 I’d like to reiterate the considerable financial benefits of the move to the school site, with the total cost of the website to the Association reduced to less than £20 a year for the website addresses.

At its last meeting, the website committee discussed other issues that had been raised by the full committee that are linked to their area of work.  A recent meeting suggested that the OBA sponsor an annual prize for the school’s prize-giving.  We think that it would be appropriate to award a prize related to Information Technology.  This would be ‘funded’ by the savings being made by the Association due to the school hosting the website.

It would be helpful if all committee members would consider producing something of interest to post on the website.  In particular, I think it would be useful to write a new piece on the benefits of the Association and what we have achieved in the last few years to try to attract new members.  Volunteer(s) sought!!

Remembrance report: Arrangements are in hand for this year’s service of remembrance at BGS on Saturday 9 November.

There being no further business the meeting closed at 8.20 pm.