The Old Bordenians Football team reported at the 2019 AGM a fantastic 2018-19 season. The OBA provides support through the funding of the team's kit. Their unrivalled exploits are detailed in the Report provided to the OBA AGM and is detailed in this report by Keith O'Shea.

The Old Bordenians football team set new standards in the Sittingbourne Indoor Men’s 5-a- side League last season by being the first team to make a clean sweep of the honours.

We won the League, the League Cup, the Knock-out Cup and the Charity Cup.

The League was a close run thing. On the last match day we were 2 points ahead of the eventual runners-up Faversham 2, but our goal difference was worse. To make matters more exciting we had to play Faversham 2 in the first of our final two fixtures and, with 3 points at stake, a defeat in that first game would have meant that the League title would no longer be in our control.

However, nerves were not an issue and we played some of our best football to win that first game at a canter to win the league title with a game to spare. We won the last game too and finished 7 points ahead, which looked a lot more comfortable that it actually was.

Two weeks later and all three cup finals were played in the same evening with just 4 minutes between games. Being old we took a squad of 8 to counteract any fatigue. Each game was close but we triumphed in all of them, beating poor old Faversham 2 in the second and third finals. That was probably too much for them and tempers did boil over in the final game, the aptly named Knock-out cup, but there was no lasting damage and we look forward to the season ahead.

The Chairman of the League stood aside after 22 years service at the end of the season and I was elected as the new Chair. If I am going to become the longest serving chairman I’ll have to keep that position until I am 85, but it’s good to have some ambition.

The team is grateful to the Old Bordenians Association for buying our new shirts. We wore them for the first time the evening we won the League and again when we won the cup finals, making us undefeated whilst wearing them. Clearly it’s the shirts what did it.

Sadly we were not organised enough to get a team photo with the shirts but below is a photo of some of the squad at the 2018/2019 AGM showing off our booty.

As ever, if anyone wants to join the squad then please contact me at This email address is being protected from spambots. You need JavaScript enabled to view it.. 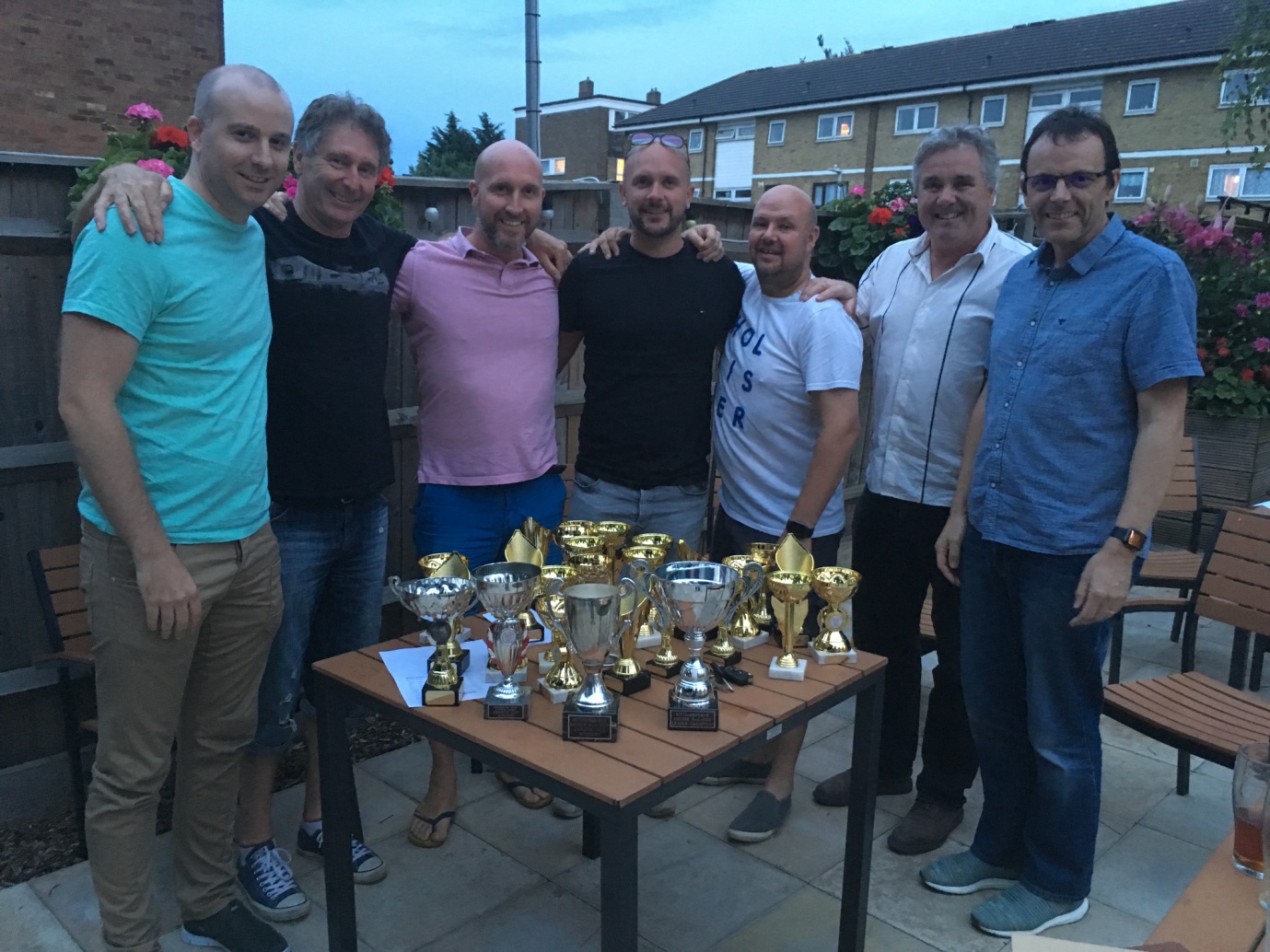