As those who studied history at the School will know, the First World War formally ended in 1919, with the signing of the Treaty of Versailles. As we prepare to mark that final WWI centenary, there have been two noteworthy events to report on. There is also an important date for your diary.

More than 30 relatives, pupils, governors and old Bordenians attended this year’s annual service of remembrance on Saturday 11 November 2017, for the 104 former pupils of Borden Grammar School who lost their lives in two world wars and other conflicts.

A recent email alerted us to the fact that, despite the sterling work carried out over the past few years by Old Bordenian Marc Stewart to identify all those Old Bordenians who have been killed whilst on active service, the names are not available on the website.  This article rectifies this oversight.  This document provides a full list of those casualties: BGS War Casualties

Of the 103 Old Bordenians whose names are now commemorated on the School's war memorials, the most recent casualty is Michael John Simpson. After having left Borden in 1972, he briefly served in the ranks of the Royal Engineers before being selected for officer training at Sandhurst. Commissioned into the Staffordshire Regiment, he was soon posted to Northern Ireland: 'The Troubles' were then at their height and while leading foot patrol in Londonderry, Michael was shot by an IRA gunman on 3 October 1974. He died as a result of his injuries three weeks later, aged only twenty-one, and was posthumously mentioned in despatches for the gallantry he had shown during his final patrol.

As part of his on-going research into the lives of all those Old Boys whose names are recorded on the School's war memorials, Marc Stewart (BGS 97-04) is now collating information relating to Michael Simpson. Unlike the School's casualties from the two world wars, relatively little information is publicly available about Michael. His place of burial, for example, is unknown - and hasn't even been recorded by the Staffordshire Regimental Association - and it has so far proved impossible to track down his family. If members therefore have any memories of Michael that they would be willing to share, especially relating to his schooldays and funeral (which is believed to have been attended by a number of Old Boys), Marc would be grateful if they could contact him via This email address is being protected from spambots. You need JavaScript enabled to view it. . 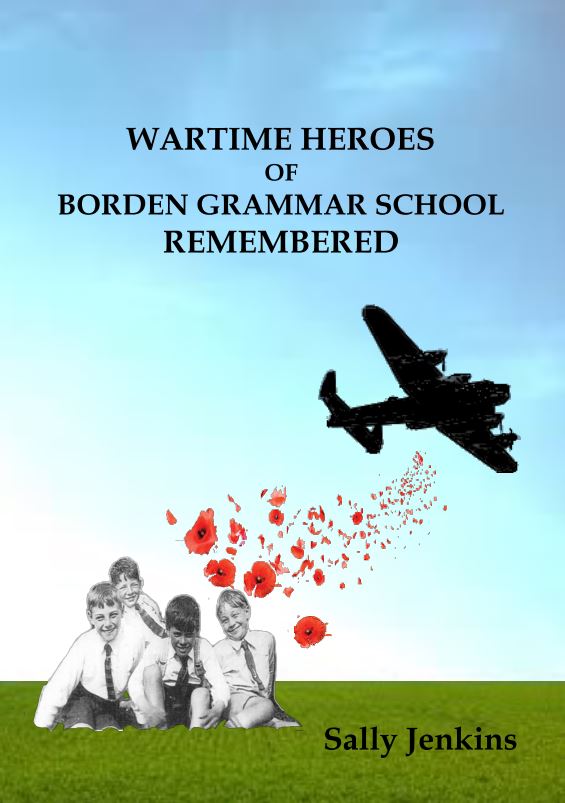 Recently a new book has been published which will be of interest to Old Bordenians.  Written by Sally Jenkins, daughter of Old Bordenian Bob Jenkins and dedicated to his memory, it is called Wartime Heroes of Borden Grammar School Remembered.  It comprises around 250 pages, including just over 40 pages of School history from 1878 onwards.  The bulk of the Book, however, is devoted to a collection of biographical details of over 60 of the 90 or so Old Boys killed on active service in WW1 and WW2 - a poignant reminder of the debt of gratitude we owe to so many young men who gave their lives.

It is part funded by Swale Borough Council and published by the Sittingbourne Heritage Museum, 67 East Street, Sittingbourne ME10 4BQ. where copies are available.  Copies are also obtainable by post (cost £10.95 inc P & P) ; enquiries to This email address is being protected from spambots. You need JavaScript enabled to view it..

Old Bordenian Marc Stewart is appealing for information about men from Sittingbourne who died fighting for their country.  The appeal was featured in Sittingbourne News Extra, one of Sittingbourne's local papers, recently.  You can read the full article here: Marc Stewart - appeal.

The Annual Old Bordenian Association remembrance gathering was held at the School at 11a.m. on Saturday 8th November, to commemorate the 99 Old Bordenians who were killed on active service during the two World Wars and in other conflicts.  It was attended by a number of Old Bordenians, including Denis Jarrett, one of the founders of this event; by Anne Whitehead, daughter of Able Seaman Harry Bruce Hartridge, Royal Navy; and by Kathy Gambell and family, relatives of George Alfred King, Merchant Navy.  We were also pleased to welcome three pupils from the School : Anthony Brinkman (School Captain), Tom Chapman (Vice-Captain) and prefect Lois Wakefield.

The annual Old Bordenian Remembrance gathering took place at the School at 11a.m. on Saturday 9th November 2013.  In the past, it has been held in the School vestibule beneath the Honours Boards which record the names of Old Boys who died on active service in both World Wars and other conflicts.  However, this year – because of the numbers attending – it took place in the Old Hall, appropriately beneath the plaque which records the Association's gift of the turret clock in memory of WWII casualties.