We are sorry to hear that Brian Tyler passed away peacefully on 24 April, 2016, aged 86.  The funeral service took place on Tuesday 10 May at 1pm, at the Garden of England Crematorium, Bobbing.

Peter Lusted, OBA vice-President, commented "I cannot claim to be one of Brian's contemporaries, but first met him when I started playing for the Old Boys Football team, aged 17 in 1968.  Brian was the "old man" playing wide on the left side.  It soon became clear that this "old man" was a player of some quality and could certainly teach the young Old Boys a thing or two.  I subsequently learnt that he had played for Portsmouth. Brian was one of life's and football's gentlemen and it was always good to see him at Old Boys' Dinners and have a chat.  A sad loss indeed."

We sadly have to pass on the news of the death of Gregor Thomson. He was a student at the school from 1986 to 1992 and was a senior prefect and head of Swale House.  He passed away after a battle with cancer on 7 February 2016.

He was born in June 1974 to Scottish parents though he was brought up in the Republic of Ireland.  He was a model student, with the school recording that he 'is a real gentleman'.  He took A Levels in Chemistry, Physics, Maths and Further Maths achieving 2 As and 2 Bs.

It is with regret that we have recently heard of the death of Joseph Wright, at the age of 26.  Joseph attended Borden Grammar School from 2000 to 2007.  His death was reported in the Sittingbourne News Extra - the full report can be read here: Joseph Wright - Obituary

We sadly have to report the passing away of Robin Bush. Our thoughts are with his family.

Every individual is unique, but some are uniquer than others!  And Ken Sears, who died on 9th November 2014, was certainly one of those.

Born in Sheerness, he lived in the same house in Winstanley Road all his life.   After attending the Broadway Primary School, he went to Borden until he was 18 and thence to Lincoln College, Oxford, where he graduated in Modern History.  He  spent a further year in Government Studies at Mansfield College before being employed initially by Coventry Council and then by the City and Guilds Institute, where he worked as an Education Officer for the rest of his careeer.  So much for the bare facts.  What made Ken so remarkable, however, was his huge range of interests and 'extramural' activities, of which three in particular stand out.

We regret to announce the passing away of Ken Sears on 9 November 2014.  Ken was a long standing member of the OBA committee and will be sadly missed. More details of Ken's life and contribution to the Old Boys will be added shortly.

We have just sadly heard that Marion Minhall, a former teacher at the school, has passed away after a short illness.  Our sympathy and condolences are with her family.

Sadly, Alan Jacobs – “Jake” to most of his friends and many of his pupils – died on 9th March, aged 89. He was one of a now-diminishing band of Old Boys whose formative years at Borden were spent under the headship of W.A.C. Claydon.

We are sorry to announce the untimely death of Christian Smith, who was at Borden from 1991 to 1993, following an accident while he was taking part in a charitable cycle ride.  Our thoughts are with his family and friends.

It is with great sadness that we have to announce the passing away of our former President and school headmaster, Harold Vafeas, on 25th January 2014, after a long struggle against cancer.  The funeral took place on Friday 7th February 2014 at 3pm at Holy Trinity Church, Margate and was attended by many OBA Committee members, Governors, Teaching staff past and present , as well as several boys from Year 13. 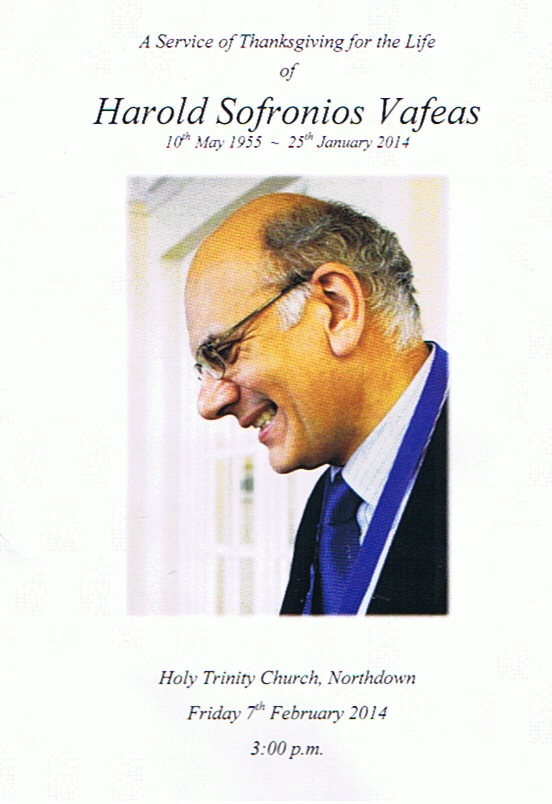 It is with regret that we have to report that Christopher Neil (Chris) Willson passed away suddenly at home on May 10 2013, aged 56.  Chris left Borden in 1975 after taking his 'A' levels and went on to study at Oxford University.

We are sad to report the passing away of John Ford on April 22nd, peacefully at Medway Hospital, after a long illness.

It is with great sadness that we report the death of Jonathan Brownridge on 22nd October 2012 at the age of just 56. Jon was at the School from 1967 until 1974 before going on to study Physics at Imperial College having been inspired to do so by John Macrae, and their shared passion for physics ensured that they remained firm friends.

Jon was an enthusiastic member of the OBA and attended many of the Dinners up until 2011. He kept in touch with a group of his contemporaries and many of those were among the almost 200 strong congregation at his funeral which was held on 1st November 2012.