Dennis Fowle has contacted the Association to report the recent death of Tony Whibley (1944-52). Although living in Hampshire, Tony maintained friendships with other OBs and attended Dinners as recently as 2018. Dennis has provided this obituary to the OBA.

The death of Old Bordenian Tony Whibley (1944-52) at 86 brings to an end a family dynasty which ran the former Halfway House pub, Bobbing, and was the driving force in 1946 in setting up a very successful Halfway House Cricket Club (later known as Bobbing Court).

Tony’s father Jack (Shuff), who had played professional football for Crystal Palace, was the landlord and his brother Jack was a real cricket talent who before the war turned down an offer to join Kent. Tony was only 12 and initially helped behind the scenes.

The pub was full of cricket enthusiasts and they agreed to form a team with all the Whibleys involved. This was quickly very successful and subsequently went on to win the local Doug Wood Cup regularly and joined the strong East Kent League and then the Kent League.

Jack was an Old Boy of Borden Grammar School, Tony a then current pupil and several talented students joined a club which developed Ernie Mackelden’s farm field at Bobbing in to a quality ground.

Tony captained the School Ist XI in 1952 and with Jack also played for a Gore Court team then among the strongest in Kent. His cricket continued to develop and after leaving Leicester University (he was the first undergraduate there to play for English Universities in the same year at football and cricket) he attracted the attention of Hampshire Cricket Club. He played for the 2nd XI and was an enthusiastic Hampshire supporter up to his death after a short illness.

His career took him to teaching and for years he was with Lord Wandsworth College, Hampshire, subsequently retiring in 1993 as a housemaster.

He and his wife Valerie – they shared a great love for horses and racing - lived in Selbourne, Hampshire, and she survives him together with their daughters Sara, Hannah and Jane. 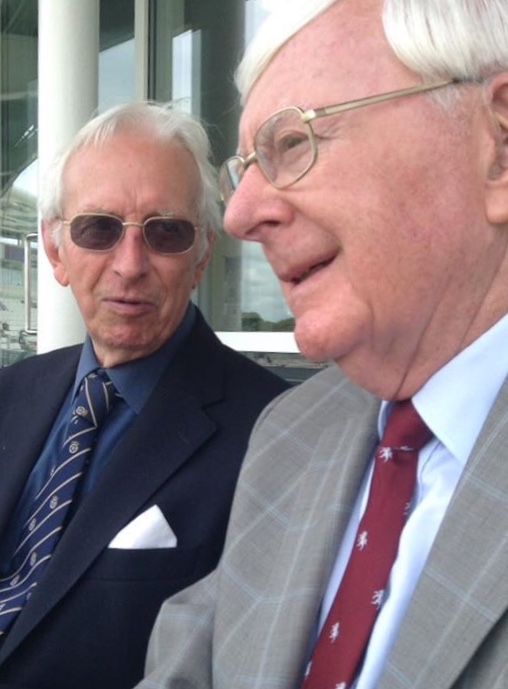 Tony Whibley (left) and Dennis Fowle at Cricket in Hampshire in 2016. They followed each other as captain of the School Cricket Ist XI in 1951/52.