After two missing years, there was much anticipation about our 2022 Annual Reunion and Dinner. A chance to reconnect with friends and make new ones. A chance to socialise again without Government mandate. It did not disappoint.

We had 51 bookings for the Reunion, which disappointedly represents an ongoing decline from years gone past. But this was not to say those who attended did not fill the Old Hall of the School with talk, laughter and great cheer. We welcomed some new faces as well as, ahem, many old ones! The Bar was in full swing from an early hour and we must thank Shepherd Neame for donating 56 bottles of mixed beers to the Dinner. A nice touch from a local business with a long heritage to support our Association. Thanks to Tim the School Caretaker for guiding Old Boys around on a tour on the ever changing, yet ever familiar School building. 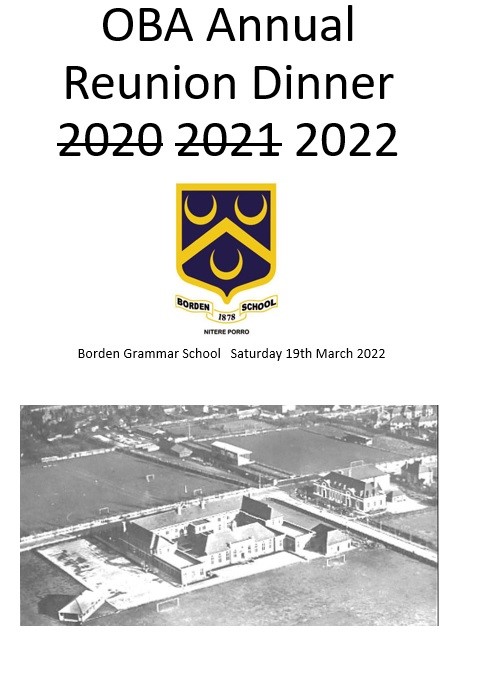 The meal itself was hearty and to the mind of this Editor, one of the best served at a Dinner for a number of years. The Cheese course was served with another new tradition, bottles of Port again donated for the diners by the 1988 School leavers. We may never know whether it was the Port or the Cheeses that saw Neil Hancock jump the proverbial gun and head over to serve himself as the Chairman wound down his speech, but there was more than enough to go around.

The Chairman’s speech of course noted the absence due to the Pandemic but also referenced the continued involvement through it by the OBA with supporting the School minibus and now the planned Sanctuary Garden. Whilst numbers may not be as strong as in the past, the Dinner has great reach with attendees coming from as far and wide as Norway, Ireland and Sheppey. Asking the audience to consider how they can support the Association in any way, he welcomed and thanked a significant financial donation by one of our younger Old Boys to the Association. We rely on donations and even those annual donations add up to allow us to support the School. On a more sombre note, the Chairman called out the names of the 15 Old Bordenians and Staff who had passed on since we last met. That of course includes Bryan Short whose death last year was a significant event for many in the Association.

The Speaker was Ashley Tomlin, Headmaster of the School. Because of Covid, this was his first Annual Dinner although there is no doubt he has had a very busy first 18 months at Borden. Ash described his transition from Policeman to Teacher and in the latter role, teaching in Kent as well as South East London. His tenure so far has been overshadowed by Covid and he described in detail the effort by him and his teaching colleagues to support the students through the period. This included such herculean efforts as turning the New Hall in to a temporary Covid testing station in a couple of days. His critical reflections on the quality of Government directions, decisions and support during this time were based on these experiences. Coming out of Covid was not the end of the challenges: there was the decision to push for the new School building now passed through planning and then a recent Ofsted inspection. Throughout this, one had the strong impression that Ashley is a talented leader, worthy of the best of his predecessors in the role and we hope he will continue for a long tenure. Coming from a Grammar School education himself, he understands the role of tradition and the OBA Committee welcome his purposeful engagement with the OBA. He has a definite view that we can support the School and he welcomes that. It is hoped that this will be the first of many Dinners that Ashley attends for years to come!

As with all good Dinners, the chat around the tables continued long after the speeches. It was a pleasure to hear the Old Hall ring with the talk and laughter of those many boys, now men, who returned again to stand beneath the honour boards not as pupils, but as Old Bordenians. Roll on the 2023 Dinner!